Driver kidnaps 3 children after picking them up from school


THIS POST WAS CULLED FROM LIB AS A PUBLIC SERVICE ANNOUNCEMENT.

The spate of insecurity in this country called Nigeria is getting quite alarming. Just imagine the below story, please spread the word. These three boys must be found alive and without being ransomed. 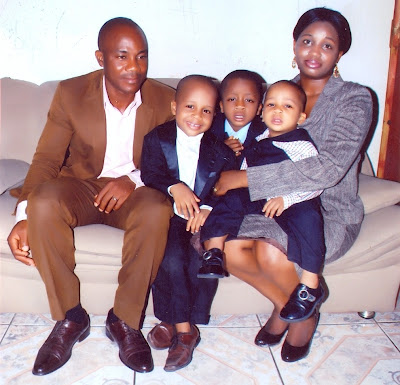 The 3 boys pictured above (Chinemerem 5, Okechukwu 4 and Nzube 2) are missing. Their driver by name Godwin picked them up from their school ABC Academy Utako Abuja around 3:30pm yesterday June 7th in a new Toyota Avensis metallic colour (without plate number) and disappeared with them. They have not been found. Anybody that has seen or heard anything about their where about should report to the nearest police station.

Please other bloggers should put this on their blogs. Also put the photo above on your dp and send to all your contacts on Facebook and Twitter. Lets all help find these children. The face of the driver when you continue...

FOR DANA AIR AND ALL THE LOST SOULS!

Do you know anyone in the ill-fated Dana crash? No you dont? So you think... this is the first time i am actually seeing the theory of Six Degrees of Separation actually work.. My dear, you know someone who knows someone who lost someone in that crash.. And to think it could have been avoided. I weep for Nigeria....

Here is some thing i came across on Facebook that had me in tears and i just had to post it..

I DIED IN VAIN!

by Lucas Togan
Let me tell you about the day I died. I was in a plane crash. I remember the last few minutes so well. Or maybe not so well because there was so much pandemonium in that small space. At first I thought it was the usual turbulence except it wasn’t. Do you think the crew alerted us to the imminent danger? Not until my head hit the air vent did it dawn on me that we were going down.

Let me tell you about the day a plane crashed into our building. We were watching a soap opera that Sunday evening. We were all tired because the day before was my 10th birthday and we’d had a party. Of course everyone was at home. My only solace was that we didn’t see or hear anything. We just died.

Did I tell you what I was doing when that big plane crashed into our street? Well, nothing interesting. I’d just come out with my bag of corn and I was setting up my fire place. I’d made good sales the day before and was believing God for a better day. I remember thinking, "Finally, Tochi will have the money for that hand-out she said was so urgent."

I want you to believe me when I tell you that I survived a plane crash. Yes I survived the impact of the crash and spent 10 minutes trying to smash the window. I succeeded in smashing the first but as I geared up to hit the second, I heard the explosion. I increased my effort but the resulting smoke enveloped me. I remember giving in - thinking how close I came to escape.

The day I died, I remember thinking just before the plane hit that busy street, the “air crash investigation” episode I’d seen the previous night. I wondered how this crash wouldl be investigated. Will it be? I wondered who the producers will cast in the reconstruction, should there be one. Who would play John, my co-pilot and Nick, the engineer?

In Vain.
I died from the impact with the air vent and I knew my death was in vain because if I’d survived that I'd have died when the plane eventually burst into flames. The fire service would be too slow to respond (negligence or traffic) and when they finally arrive they’d be short on resources.

I died in vain because I knew our names would not be published in any “manifest”. I died in vain thinking how much trouble our landlord will go through before (if ever) he gets compensation for his damaged building.

I died in vain because I know nobody will notice that I was also a victim in this national tragedy and if there’s any compensation to victims my Tochi might never be a beneficiary.

I died in vain because I know that when my body is taken to the morgue, they will simply identify me and hand me over to my folks without any autopsy. They will say I wasn’t burnt like the rest and my folks will only be too glad to go bury their dead. Nobody will consider the fact that an autopsy will ascertain the true cause of my death and help in training people on how to better handle escape in emergency situations. Nobody will know how close I came to escaping.

Today as a Nigerian I died in vain because I know that at the end of the day (after all the religious bias is applied ~ "Will of GOD" et al) there will be another plane crash tomorrow whose report will be a copy of this one.