Good to know you made it through all the hullabaloo of 2011 including but not limited to BH, The Jonathan Family comedy show, fuel subsidy, April elections and all it's attendant crises, killer phone calls, ISP downtimes, bleak Xmases, retrograde governmental policies like Lekki tolls, Lagos Ibadan PPP ish, Benin-Ore  Express Road to Heaven/Hell(if you believe the Holy Book), Sovereign Wealth Fund( Nigeria's own trust fund but for who, You and I or for them), winch for Jesus, Super Eagles's not playing Nations Cup, ABSU rape, LASU rape etc.

But 2011 was not so bad personally and collectively. For instance, we all now know we( I did not vote but i did not voice out my reservations loud enough, maybe the youths will not have fallen for the " I am voting Jona not PDP scam) voted in a LAMEDUCK to be our thief chief security officer. We also now know that if a Man of God says you will die, then you go die unless you go and beg him asap. For me personally, 2011 was a watershed. It was the year i finally said good riddance to the salary trap and crap. While it was particularly difficult financially, i go into 2012 knowing fully that my future is in my hands, literally! I also had time to work on myself thereby becoming a better person for my significant other(being single is a gift, not a curse, use your single-hood well) as well as for myself.

With all the drama and whatyoumaycallit that 2011 brought, we saw it through..... I met so many interesting people during the course of the year whether in reality or cyberlity and i am indeed hopeful that N I G E R I A S H A L L B E G R E A T again whether the comedians above or the FEE DEE FEE likes it or not. BH or No BH, there shall not be a Nigerian spring as being postulated in certain quarters as the religious fault line BH is trying to explode shall not come to pass for the simple reasons given by the late sage, Fela Anikulapo-Kuti in the late 70s. If you don't know, better ask somebody"hint" Nobody wants to die

Watch this hilarious clip from Sahara Reporters while i settle down to what promises to be a Saturday morning staple in years to come, fresh ijebu garri soaked in ice cold water with milk and akara or moin-moin. See you all in 2012.

P.s. The title of this post is just to reflect on my 2012 state of mind regarding this blog. If you like nice guys, sorry, you are on a long thing.
P.P.S. watch the video especially at 2:00 -3: 00, absolutely hilarious. had me in stitches.
p.p.s.s MAY THE SOULS OF THE DEARLY DEPARTED ABIDE IN THE ALMIGHTY. YOUR SACRIFICES WILL NOT GO UNNOTICED. REST IN PEACE, YO'ALL!

Burdens of Living in Nigeria

I have decided not to write anything concerning you and your albatross BH on this page but your recent statement on the last outing of BH has necessitated this post. 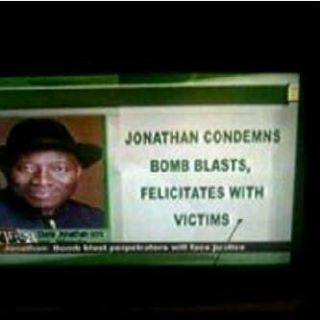 Frankly, i did not vote for you as i do not have confidence in you and i still don't as i know for a fact that you are not the Nigerian messiah. But your statement which came almost 10 hours after the outrages in various part of my beloved Nigeria is way too low, even for your usual low standard. The Pope, within 1 hour of news reports, had issued a statement condemning the attacks but rather you went to Church and was shown on National Television dancing and your NTA reported that you felicitated with the bomb victims?????????? WTF, how insensitive can you get?

Merry Xmas and a Prosperous New Year to you all especially Toinlicious, Ginger(www.mak2chi.com), Che( Naija Banker), Dayor, Oroque, UnveilingGold, Jemimma, Miss PweddyFace and the secret readers from all over especially you in Regina, Saskatchewan.

Do all have a merry holidays and remember that even in moderation, you still have to be moderate.

Remember JESUS is the reason for the season and here is a video i found on Youtube that i think is apt.

That's the question i decided to answer!

The below was culled from Facebook and was written by Egbon Femi Sowoolu, veteran broadcaster. I loved the seriousness as well as the wittiness and decided to share here. Do enjoy.

by Femi Sowoolu on Wednesday, 14 December 2011 at 19:24
What an eventful year. For some, successes; for others better forgotten memories – that’s the way things are. Life usually gives us back exactly what we give it. They call it the mathematical law of existence. Religionists may prefer to call it one of the unwritten laws of God, simply put, give, and ye shall receive (…in equal measure?) No matter how the year is viewed, 2011 was a challenging year for many Nigerians. Some of us have come through it smelling like pink roses, while others stink like the carcass the cat brought in last night – you never quite get rid of the pong. So to round up what may go down as a most defining year in our nation’s history, permit me to amuse you with my 2011 Random Awards! The good, the badt, and the, well…awful!

More Power to the Yoni!

Why have i decided to post another article about the Yoni or beaver or coochie or whateveryoumaycallit?

Simple; because without the Yoni, there won't be a me or you so you females need to realize that you carry the cradle of life within and maybe then,

My ISP decided to make its way back to life!
While i was away, i came across this article that made for an interesting read!
Power to the Yoni!
But seriously, where would we be without the Yoni and the Yang?
15 Crazy Things About Vaginas | Psychology Today:

I have not abandoned this blog.

I have been tres busy with work, life and just living.

Now, to make matters worst, my ISP(no advert) decides to have a downtime!